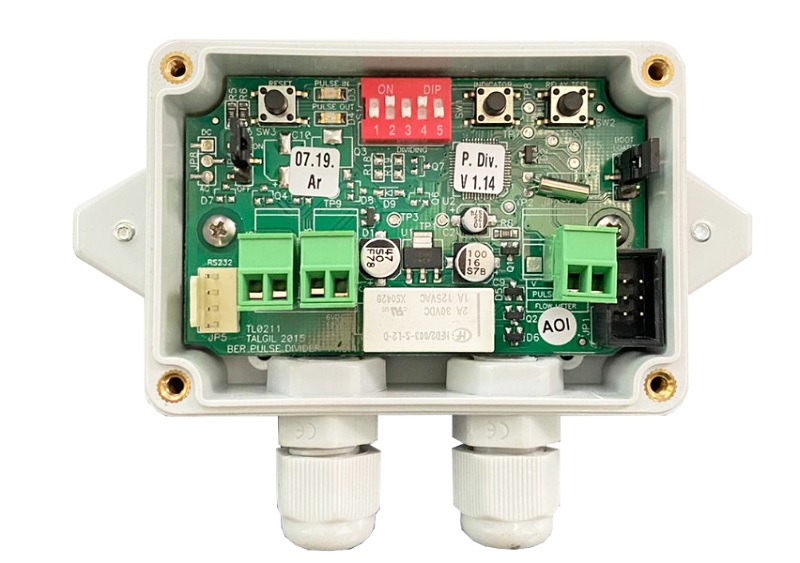 The purpose of the pulses divider unit is to enable reading short or high rate pulses by controllers having a scanning rate of once in a second or lower.

The unit expects to receive dry contact inputs, usually arriving from devices such as water meters or fertilizer meters, it will count the pulses and emit a symmetric pulse per each "x" pulses counted, based on the selected setting. A special case is when x equals 1, then for each pulse received at the input there will be one pulse generated as output (not necessarily symmetric) whose width will be no less than 1 second. This way even if the input pulse was narrow the output pulse will be wide enough not to be missed by the controller. Obviously, the pulse rate in this case cannot be higher than one pulse every 2 seconds.

In the OPERATION TABLES below, the Division factor defines how many input pulses will be represented by each output pulse. Notice that a complete pulse consists of the positive and the negative parts of the pulse.

EXAMPLE: Let’s assume that Dip switch 5 = OFF (TABLE 1 is selected) and the Dip switches 1-4 are set to: 0100 (division by 4). Therefore each 4 pulses at the input will cause 1 symmetric pulse to be emitted at the output. Notice that a complete pulse consists of both the positive and the negative parts.

There are 3 push buttons with the following functions:

The two LEDs behavior depends on the Indicator button:

Regularly when the Indicator button is not pushed, the GREEN LED blinks a short blink whenever a pulse is emitted at the output. The RED LED will regularly remain off but it will blink a short blink when the rate of input pulses is too high, in this case a higher division factor should be selected.